I love making apple crisp when I’m in a hurry and I want an apple + cinnamon dessert.  It’s a great alternative to apple pie or apple tart.  However, apples are getting expensive here!  I also had some pears sitting around in the apartment for the past week, so I thought, why not make some pear crisp?  This was the very first time I tried baking with pears, and I definitely want to bake more with pears now!  Pears retain a lot of its water content during the baking process while absorbing the other flavors.  Where in comparison to apples, sometimes we get those pies where the apples get really runny and it’s just a huge watery mess!  Also, pears are generally less flavorful than apples, so it really presents itself as a clean palette for the cinnamon and nutmeg flavors.

Method:
1. Pre-heat oven to 375ºF.  Coat an 8×8 pan with oil or baking spray.
2. Peel, core, and slice the pears into very thin slices.  Spread the pear slices on the bottom of the pan.
3. In a medium bowl, stir together the brown sugar, flour, oats, butter, cinnamon, and nutmeg with a rubber spatula or wooden spoon until mixture resembles crumbles.
4.  Crumble the mixture over the pears.  Bake for 30 minutes. 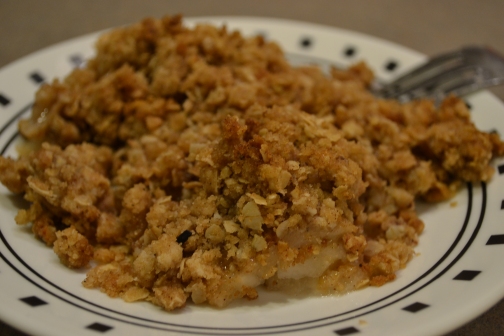 this is how our supposedly feral/outdoor cat is enjoying the great outdoors.
grandmother, what big ears you have!
a peek into the one day in the last month when i actually put on something besides pajamas (i’m typing this in … pajamas). my best friends gifted us a newborn session and i’m so happy that we have official proof that laurelin is an absolute adorable non-potato. swipe to see some of my favorites, but not all because dressing up was difficult so i have to ration some images for the christmas card this year.
happy due date LoBug! just staring at you in wonder and thinking about how everything in my life happened exactly as it should so that you could be mine 🤍
when we say “i love you”, ian and i would often one up each other to see who could end on “i love you most”. i can safely say that after this week, i win. i love him most. i didn’t think it was possible, but when my grinch heart grew three sizes last week, a huge part of it spilled over into my affection for this man. our parenthood journey began with an extended stay at the hospital because laurelin had jaundice. we had to do extra feedings and supplement with formula while our baby girl went through different interventions to combat the jaundice. it was really physically, psychologically, and emotionally exhausting. that, coupled with childbirth recovery, meant i spent a lot of laurelin’s first days crying, feeling helpless, feeling like i failed my baby, all while in physical pain. at the hospital, ian woke up for every feeding, even if all he could contribute was keeping our sleepy girl awake and burping her. the past 10 days, he’s been my rock, offered a shoulder when i just needed a good cry, acted as my carrier pigeon, and anticipated/met my every need (which ian, if you are reading this, i’m probably hungry. can you grab me a snack? and while you are at it, can you figure out how to lactate so you can take over half the feedings?) i have a pretty cool dad so i think i’m a good judge of this, but laurelin really won the dad lottery. he’s easily her favorite person, burping wizard, storyteller extraordinaire, diaper genie, and her favorite cuddle buddy.
so it’s a strange tradition that ian and i have that we spend our wedding anniversary in the hospital. on our 1st anniversary, ian woke up with a bout of viral vertigo and we spent the day in the ER. on our 2nd anniversary, chewie got food poisoning, barfed and pooped all over our house so we took him to the animal hospital. on our 3rd anniversary, fearing it was my turn to go to the hospital, we spent it flying to paris because my logic was that there are no hospitals in the sky. on our 4th anniversary, covid sent everyone to the hospital so we hid from the world. this year, on our 5th anniversary, we welcomed our darling baby girl into the world.
Loading Comments...
%d bloggers like this: